I was joking with a friend last night about the song, “Auld Lang Sange,” which is sung frequently around the turn of the year. One phrase from Robert Burns’ esteemed poem stood out to me:

“Should old acquaintance be forgot…”

I’ve never really listened to the song’s lyrics. Perhaps it’s the old English that prevented me earlier. But I got to thinking about it, and yes, I think old acquaintances should be forgotten. As I’ve gotten older, I more clearly draw the line. I delete people from my contact list that I haven’t spoken with in six months. To me that’s long enough to know if we’re meant to have a meaningful relationship.

The new year is always a time of reflection for me. Some days ago, I began the process with a list of all the things I was grateful for. The list topped out at three pages front and back. Hurray! Then I moved on to all of the things I didn’t want to bring forward, things like self-doubt, fear of the future, limiting beliefs, grudges, etc. You know what I’m talking about. Lastly, I picked up a fresh piece of white paper and began listing all of the things I wanted to have the Universe bring me this year with the caveat I now include with everything: “this or something even better.” I carry things over from year to year, sure, but I keep believing in them, keep sprinkling fairy dust on them, waiting for them to manifest. This year after meditating, I realized I needed to dream even bigger. And to open my arms to receive all the goodness in store for me.

On the eve of the new year, I bring out all my lists and give them one last gander. To the old, I say goodbye. To the new, I seal all my hopes and dreams in a crisp new envelope. I open my envelope from the past year, examine what I’ve manifested, and then let go of that too. With the new envelope in hand, I lay it in a sacred space in my meditation room. Every once in a while, I take out the letter and bless the intentions, giving thanks for those which have already appeared.

This year, I’m considering writing down all the acquaintances I need to say goodbye to—or the ones who bid me goodbye. I’ve never done it that intentionally, but perhaps it’s a fresh way of letting go of the past. There have been some hurts and misunderstandings. There have been some shifts and some changes in life. Whatever the reason, these folks have stopped walking with me. It’s time to officially say goodbye as I move into this new year. I want to manifest a lot of loving, fun, and trustworthy people in my life.

How do you cross the threshold into another magical time? What do you do with your blank slate?

Whatever it is, I’m wishing you all the love and peace and joy and abundance you could ever dream of. 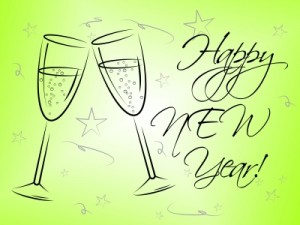